US issues Travel Alert for
Americans in Europe 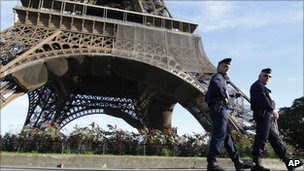 Intelligence sources say al-Qaeda plans to carry out attacks in the UK, France and Germany
The US government has warned its citizens
in an official travel advisory to be vigilant travelling in Europe,
amid fears of an al-Qaeda commando-style attack.
The state department advised Americans to take care while in tourist areas.

The department did not specify a country, issuing the updated guidance for the whole of Europe.

Security sources have warned of an al-Qaeda plan to send teams of gunmen to crowded places to kill civilians.

They said cities in the UK, France and Germany were thought to be targets for the militants, in attacks analysts feared could be similar to the 2008 atrocities in Mumbai.

After intelligence details of the plot had been leaked to the US media last week, officials said that the plan had not been stopped but that an attack was not expected to be carried out imminently.

The state department alert said European governments had "taken action to guard against a terrorist attack", but that "terrorists may elect to use a variety of means and weapons and target both official and private interests".

1 Oct: US officials tell reporters Osama Bin Laden may be among planners of attack on Europe

"US citizens are reminded of the potential for terrorists to attack public transportation systems and other tourist infrastructure," the alert sad.

"Terrorists have targeted and attacked subway and rail systems, as well as aviation and maritime services."

Such an alert could have negative consequences for European tourism if travellers fear that there is a risk of terror attacks and cancel their journeys.

However, US citizens were not told to avoid travelling in Europe, and the advisory is less serious than a travel warning.

After the US alert was issued, the UK confirmed it had updated its guidance for travellers in Germany and France, warning of a "high threat" from terrorism.

And UK Home Secretary Theresa May said Britain would continue to work with its allies to combat militants.

"I would urge the public to report any suspicious activity to the police in support of the efforts of our security services to discover, track and disrupt terrorist activity," she said.

French Interior Minister Brice Hortefeux said the threat of a terrorist attack was real, but that the country was not raising its alert level - currently at its second-highest.

"We are analysing what they say. We are taking their comments into account. And we are naturally vigilant," Mr Hortefeux told AP Television News.

After news of the possible plot first came to light, US anti-terrorism officials were reported to have said that they believed al-Qaeda leaders, including Osama Bin Laden, were involved.

No arrests have been made, but European officials said several individuals were still under surveillance.

The suspects include British citizens of Pakistani origin and German citizens of Afghan origin.

US forces have carried out at least 25 drone strikes in the last month in Pakistan's tribal areas - the highest monthly total for the past six years, US media reported.

The US has been pushing Pakistan to increase their search for the militants, who are believed to be hiding in a mountainous border region in the country.

Posted by EvansMediaUSA at 4:09 AM