Kim Jong-un's ex-girlfriend was among a dozen well-known North Korean performers who were executed by firing squad nine days ago, according to South Korean reports.

Hyon Song-wol, a singer, rumoured to be a former lover of the North Korean leader, is said to have been arrested on Aug 17 with 11 others for violating laws against pornography.


The reports in South Korea's Chosun Ilbo newspaper indicate that Hyon, a singer with the Unhasu Orchestra, was among those arrested on August 17 for violating domestic laws on pornography.

All 12 were machine-gunned three days later, with other members of North Korea's most famous pop groups and their immediate families forced to watch. The onlookers were then sent to prison camps, victims of the regime's assumption of guilt by association, the reports stated.

“They were executed with machine guns while the key members of the Unhasu Orchestra, Wangjaesan Light Band and Moranbong Band as well as the families of the victims looked on,” said a Chinese source reported in the newspaper.

Hyon's band was responsible for a string of patriotic hits in North Korea, including "Footsteps of Soldiers," "I Love Pyongyang," "She is a Discharged Soldier" and "We are Troops of the Party." Her popularity reportedly peaked in 2005 with the song "Excellent Horse-Like Lady."

The 12 who were executed were singers, musicians or dancers with the Hyon's band,, the Unhasu Orchestra or the Wanghaesan Light Music Band and were accused of making videos of themselves performing sex acts and then selling the recordings.

The reports stated that both groups have been disbanded as a result of the scandal.
Some of the musicians were also found to have bibles when they were detained and all were treated as political dissidents.

Kim Jong-un, who became leader of North Korea after the sudden death of his father in December 2011, is believed to have met Hyon about 10 years ago and struck up a relationship. 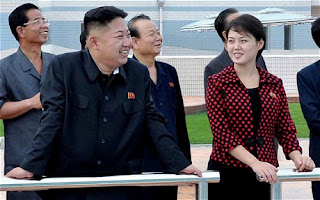 His father, Kim Jong-il, did not approve of the relationship and ordered him to break it off. Hyon subsequently married an officer in the North Korean military and reportedly had a baby, although there are suggestions that Hyon continued to see Kim after her marriage.

Kim's wife, Ri Sol-ju, was also a member of the Unhasu Orchestra before marriage and one theory is that Ri objected to the continuing high profile of her husband's former girlfriend.

North Korea's Communist dictator reportedly purged his own step-mother, Kim Ok, from her post as a senior official in the Workers' Party Finance and Accounting Department as he sought to tighten his grip on power within the country.

She was luckier than Kim Chol, vice minister of the army, who was executed with a mortar round in October 2012.

Kim Chol was reportedly executed for drinking and carousing during the official mourning period after Kim Jong-il's death.

On the explicit orders of Kim Jong-un to leave "no trace of him behind, down to his hair," according to South Korean media, Kim Chol was forced to stand on a spot that had been zeroed in for a mortar round and "obliterated."

An expert on North Korean affairs believes the singer was executed for "political reasons."

"If these people had only made pornographic videos, then it is simply not believable that their punishment was execution," Toshimitsu Shigemura, a professor at Tokyo's Waseda University and an authority on North Korean affairs, told The Daily Telegraph.

"They could have been made to disappear into the prison system there instead.

"There is a political reason behind this," he said, suggesting that the groups may have been leaning towards a rival faction in Pyongyang's shadowy political world.

"Or, as Kim's wife once belonged to the same group, it is possible that these executions are more about Kim's wife," Professor Shigemura added.

Posted by EvansMediaUSA at 5:36 AM 0 comments