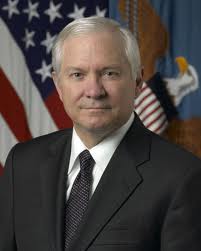 In accepting the prestigious award, Gates said he was doing so on behalf of all the young men and women in uniform who serve their country in time of war.

Gates received the National Defense University Foundation’s award at a ceremony here for his contributions during four decades of government service.

“Tonight we sit and enjoy this wonderful occasion and each other’s company, but we must never forget that our comfort and safety are borne on the brave and broad shoulders of those young men and women in uniform,” he said.

In honoring servicemembers, Gates quoted Gen. George C. Marshall, the Army chief of staff during World War II and Nobel Peace Prize winner for whom The Marshall Plan to rebuild Europe after the war is named.

“More sacrifices will be required of them to defend the security and freedom of our country in this dangerous new century,” he said. “And it is our duty -- it is, indeed, our sacred obligation -- in Marshall’s words, to make things well for them.”

Their well-being, Gates added, is his continuing highest priority.

In his comments, Gates recognized retired Republic of Korea Army Gen. Paik Sun-yup, who traveled from South Korea to attend the gala.

“For those of you who don’t know,” Gates said, “General Paik was the ROK army’s youngest and fiercest division commander during the Korean War and for nearly six decades has been one of America’s most steadfast friends.

“Sir,” Gates told him, “I’m pleased that you came so far to be here, and thank you.”

“The American Patriot Award is presented each year to a citizen whose sacrifice and dedication stand out as remarkable,” Rondeau, president of National Defense University, said.

“To someone who answers the call to public service, patriotism is not a concept. It is a commitment, it is a duty upon which we act,” she added. “This level of commitment is what National Defense University Foundation prizes above all else. It is what we recognize and acknowledge every year and again this year.”

Cartwright thanked the university staff, professors, executives and the National Defense University Foundation for “making a difference” to all the field-grade officers and general officers who attend the institution, educating themselves and enriching their spirits.

One of several standing ovations of the evening acknowledged the gala’s special guests -- more than 40 members from each military service who were part of the 2010 Sponsor a Patriot program. Their commanders chose them based on character and dedication to country, and some came from around the world.

In a video message played during the celebration, former President George H.W. Bush highlighted Gates’ “monumental” contributions to his country.

“For eight presidents, having gone from raw recruit to CIA director and now secretary of defense, Robert Gates has been wisely and relentlessly fighting and winning America’s wars,” Bush said.

The American Patriot Award recognizes exceptional Americans who demonstrate a love of country and whose leadership and dedication symbolize U.S. ideals, values and democratic principles.

Beyond honoring the recipients, the gala supports the university and its mission of preparing military and civilian leaders from the United States and other countries to examine national and international security challenges through educational and research programs, professional exchanges and outreach.

The main campus is at Fort Lesley McNair in Washington.

Posted by EvansMediaUSA at 6:02 PM